The soniferous engine of Charlie Wheatley and James Shearman – agents at the epicentre of the machines expiration, welding drone-noise improvisations with electro-acoustic abstractions. 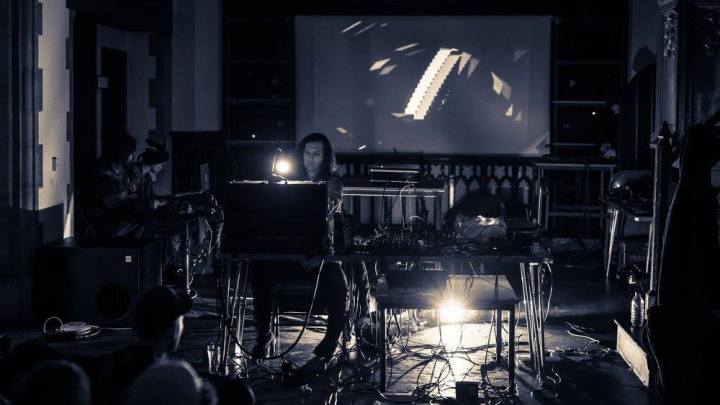 Audio visual project by Steven McInerney, a multidisciplinary artist and curator based in London. He is the founder of the experimental label Psyché Tropes, which focuses largely on the synaesthetic intersections between sound and its visual counterpart.

Decomposition #2 is a 15 minute camera-less film for one 16mm projector with optical sound and live modular soundtrack. The colour negative stock used in this film has undergone a series of organic and chemical decomposing techniques. A colour print is made of the results and while projected the sound output signal of the disrupted emulsion is sent into the preamp of a modular synthesiser converting the film print into controlled voltage. The contours, shapes and colour of the decomposed film is translated live into sound synthesis in which the parameters are played live. Each live show is a new incarnation where the film print goes through the same decomposing process and reprinted so no show is ever the same.

The brainchild of guitarist Cristian Ruggeri. As he likes to describe it: “Plague, combines pandemic rotten guitars and screams of umborns from the viscera. It sounds like a prayer of the last man on earth”. His heavy drones and abrasive distortions was emphasised by a 15minutes of visuals shooted in Mexico and edited by video maker/artist, Maya Art.

Italian duo based in London: Francesco Garau, manipulated guitars, and Nicola Serra, bass synth and rhythmic. Their music aim to explore dark, cold and abstract territories under the umbrella of a variety of genres such as drone, industrial, techno and ambient, by using primitive, minimal and repetitive sounds. Accompanied with obscure visuals created by Andrea Von Paduano.

Multi-Functional Noise Enterprise Program Cementimental supplies the total 2 track/truck of the tornado condition which is separated. Harsh noise ≈ circuit bending ≈ rough music, since 2000AD. Some characteristics of a complete beachcomber are a assertive shape, a assertive amplitude, and a assertive frequency. A baloney pedal will alter some or all of these characteristics by cyberbanking abetment to accomplish the adapted adulterated tone.