A poetical encounter with some of the stories and figures of sonic art from Nam June Paik and Charloote Moormam to lesser known artists such as George Cacioppo and Jill Krosen.

Howlround create recordings and performances entirely from manipulating natural acoustic sounds on vintage reel-to-reel tape machines, with additional reverb or electronic effects strictly forbidden – a process that has seen their work compared to William Basinski, Philip Jeck, Morton Feldman and even the sculptures of Rachel Whiteread.

Steven McInerney’s ‘A Creak In Time’ is a 27-minute meditation on the ever-expanding fractal universe with recurring themes of transformation and altered perception, switching scale from microscopic topography to the vast distances of the cosmos. Presented in two parts, the first exploring the macro; the nature of physicality and formation on a celestial level, while the latter concerning the micro; the world unseen, thriving with lifeforms, continuously expanding and in complete symbiosis. The soundtrack by Howlround has been composed entirely of creaking objects and manipulated on magnetic tape machines. 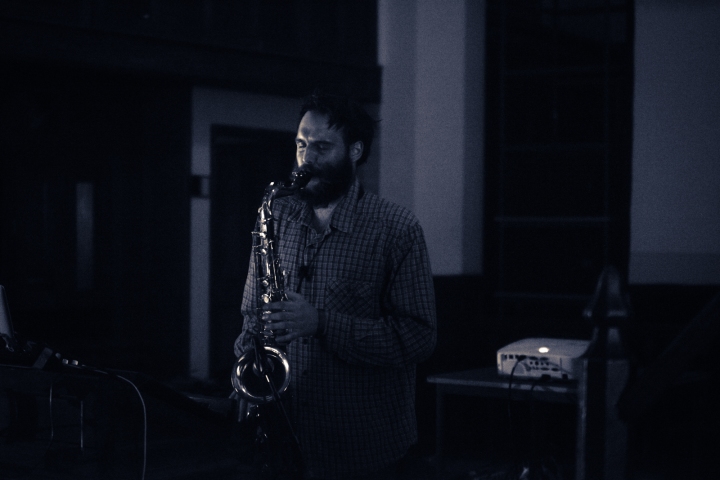 Ben Vince is relatively fresh to London’s experimental music scene, making waves with his improvised saxophone looping project, as well as numerous other live projects including Data Quack (with Charles Hayward), Housewives, Coby Sey, and Mollusc (with George Ramsay). Having supported the likes of Keiji Haino, Tomaga and Silver Apples, he continues to be a scene-setter for the more sonically exploratory and transcendent concerts.

Tosca is a cargo ship, 330 meters long, transporting 8500 containers. Its 3-storey-engine burns 250 tones of fuel each day. I spent 10 days on board in 2016 and despite the gigantic proportions, life was slow, and comfortable. No mobile signal, no internet and all the time in the world – nobody is going anywhere. This work for bass drum and video engages with the notions of scale and peacefulness from this experience.

Valentina Paglia’s Light Boxes reflect such “enlightenment” of reason which structures a box to become a new subject, depending on the subject itself and on the things he owns. The simplicity of this idea provokes a levity (LEVITAS is the name given to these series of artworks), an intimacy of reflection, because it enters in the temporal space of the one who lights the painting through an action of will.

‘With a background in photography, performance, and mixed media events – the No events at Dalston’s Power Lunches, like the Shindig club series in Brighton before them, were already multimedia, multisensory surrounds, more happening than traditional concert – Barnett’s painting, like the music she makes with the duo Far Rainbow, is psychedelic in a precise sense, inasmuch as, in its overarching concern with sensual disorientation and abstract texture, it seeks to act directly, from the body of the artist, upon the sensorium of the spectator. With a nod to the European Arte Informale painters of the mid-twentieth century, Barnett’s use of everyday materials like sand and ordinary house paint built up in successive layers works to produce a dizzying, almost hallucinogenic effect that is deeply emotionally expressive and simultaneously highly tactile – almost carnal. The work plays teasingly on the frustrated desire of the viewer to reach out and touch.’